From ParabolaWiki
(Redirected from Download)
Jump to: navigation, search

The signature can be verified by importing the "Signing Key", noted beside each release image. Verifying signatures is beyond the scope of this article; but the Parabola developers signing keys are published on the Parabola website.

It is strongly recommended that you keep a Parabola LiveISO ready to use at all times. It will save you much time and trouble, if ever the system becomes un-bootable, or otherwise needs repair.

Which one should I choose?

1 Migrating to Parabola from an existing Pacman-based Distro

If you are currently using another pacman-based distro (e.g. ArchLinux{,32,ARM}, Artix, Manjaro), there is no need to download a Parabola image. Simply follow one of the Migration Guides to set your running system "Free as in Freedom".

The Parabola ISO images can be burned to a CD/DVD, written to a USB stick, booted directly from GRUB, or booted directly by a virtual machine (the installation guide explains how). If you have an existing Parabola GNU/Linux-libre system, and a Parabola LiveISO ready for emergencies, then you should not need to download another LiveISO. An existing Parabola system can be updated simply, at any time, with the pacman -Syu command.

Be sure to follow the installation guide, if you install manually "The Arch Way". 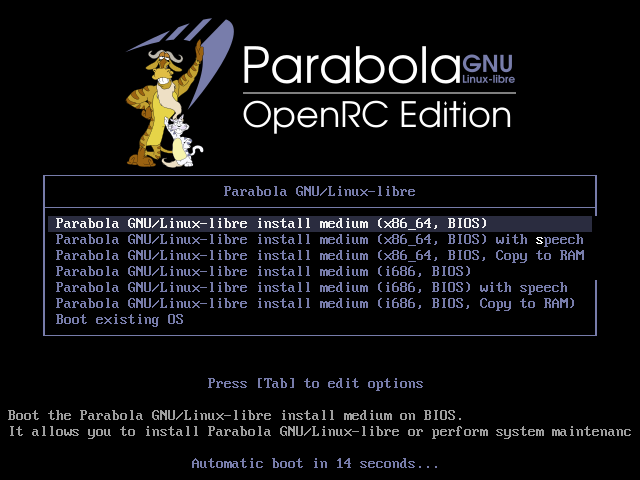 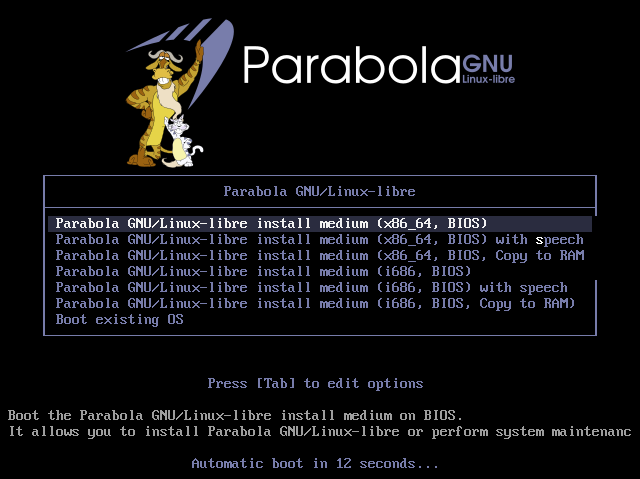 The Parabola-ARM release tarballs can be extracted directly to an SD-Card, or to a virtual machine image (see the ARM installation guide). Note that there is currently only a single configuration available, and that it does not include a boot-loader. This may change in the future, if enough demand is expressed for other configurations.

This section also contains raw virtual disk images, which are bootable by Qemu and possibly other virtual machine emulators.

This section is an exhibit of new features, software, and desktop environments currently in the experimental, testing, or pre-release development stages. Theses are works in progress; but most normal functionality is expected to behave properly.

Please do try them out and report any bugs that you may find to the "Installation Media" bug tracker.