From ParabolaWiki
Jump to: navigation, search

Just as with all software packages in the Parabola repositories, the Parabola GNU/Linux-libre release ISOs and tarballs are cryptographically signed by an official member of the Parabola Project. Checksums are also provided to quickly verify that the downloaded image itself is not corrupted; but the signature is most significant. Any of these files may be obtained from sources other than directly from the Parabola project servers. Only a valid trusted signature implies that the ISO file was received in the original state as provided by the Parabola project.

The signature can be verified by importing the "Signing Key" noted beside each release image. Verifying signatures is beyond the scope of this article; but the Parabola Developers and their signing keys are published on the main website.

Torrent downloads are recommended. A web-seed capable client is recommended for fastest download speeds. If you can spare the bytes, please leave the client open after your download is finished, so that you can seed it back to others.

Notes on the different editions and variants:

2 Migrating to Parabola from an existing Pacman-based Distro

If you are currently using another pacman-based distro (e.g. ArchLinux{,32,ARM}, Anteregos, Manjaro), there is no need to download an ISO image. Simply follow these instructions to set your running system "Free as in Freedom".

The Parabola ISO images can be burned to a CD/DVD, written to a USB stick, booted directly from GRUB, or booted directly by a virtual machine (see the the installation guide). These are for new installations and use as a system rescue disc; an existing Parabola GNU/Linux-libre system can always be updated with pacman -Syu. 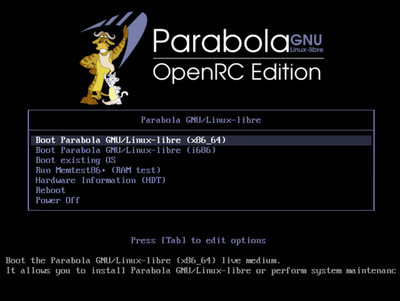 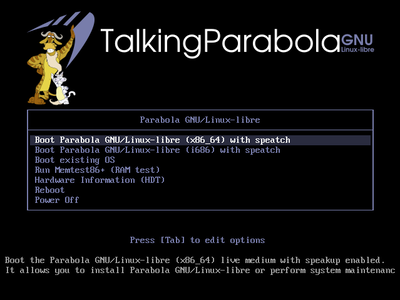 TalkingParabola is a derivative install ISO based on TalkingArch. It is a respin of the Parabola ISO modified to include speech and braille output for blind and visually impaired users. TalkingParabola retains all the features of the Parabola live images, but adds speech and braille packages to make it possible for blind and visually impaired users to install Parabola eyes-free. (Command-line only) 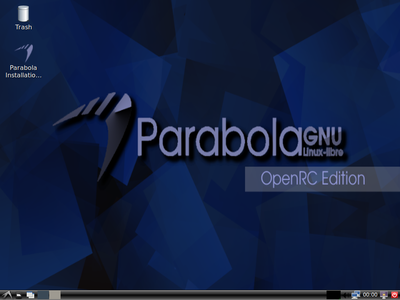 The Parabola-ARM release tarballs can be extracted directly to an SD-Card, or to a virtual machine image (see the ARM installation guide). Note that there is currently only a single configuration available. This may change in the future, if enough demand is expressed for other configurations.